We recently had a conversation with our mobile app developer, Michael Doise. We discussed Michael’s background as a programmer with vision loss and some of the features he’s been working on for WayAround. Keep reading to learn more about Michael and three key highlights from the conversation. You can also watch the entire webinar!

#1 – It’s getting easier to be a programmer with vision loss.

When Michael got started in programming in the mid-1990s, it wasn’t something that a lot of people did. Social media was new, and connecting with other programmers was difficult–especially if you were just breaking into the profession. Now it’s easier to reach out and find the folks you need to get help. There are bootcamps and courses where you can learn all you need.

Michael wants to let aspiring programmers know that it’s not impossible to make a career in programming even if you have vision loss. If you like to solve problems, programming is the career for you.

Many of the tools that are being released are becoming more accessible because more of them are built by the big players like Microsoft and Apple that have a commitment to accessibility. Even features that aren’t specifically for accessibility like inverted colors and dark mode ​​make a difference. Tools that are now becoming standard help programmers with low vision, like Michael, be able to glance at a piece of code just like everyone else can.

#2 – WayAround is a great system for braille users.

Michael was born with vision loss and he started learning braille at 2 years old. He first learned his name in Grade 1 braille. Even though Michael has enough vision to see some things, he still uses braille to read books. Michael recommends pairing WayAround with a refreshable braille display so you can read any of your WayTags in braille. It’s a great way to read long amounts of information on personal tags and also public WayTags placed in tandem with ADA signs. Braille displays are also very useful for deafblind users to get as much information as possible.

#3 – Michael loves working on a tool that helps people to be more successful in their lives.

Many of the features Michael has been working on build support into the WayAround system. Dark mode compatibility is available in WayAround 3.5. (This version was in beta testing at the time of the webinar and is now available on the Apple App Store and the Google Play Store.)

One of the features that Michael is particularly excited about is the new image pan and zoom. This allows for folks who have low vision (like Michael) to zoom in and see details you may not normally see. Images are available for public WayTags, like the labels on WayTag packages.

For Michael, ​​putting out a new release is providing a service. The entire WayAround team works closely with our customers to improve the app. Many of the newest features came from requests that our users had. Because Michael uses WayAround in his own home, he is able to look at possible enhancements from a user’s perspective.

You can watch the entire webinar on our YouTube channel. 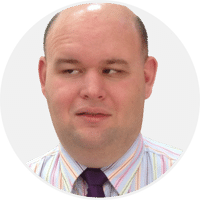 Michael joined the WayAround team last fall as our Mobile Accessibility Developer. Michael works on both the iOS and Android versions of the WayAround app, and he really has a finger on the pulse of both technology and accessibility. What new accessibility features are coming and how can they be incorporated into the WayAround app? What mainstream features can be really beneficial for our users? What’s the latest and greatest with NFC? Like our cofounders, Michael uses WayAround to make his own home more accessible.

Michael started building apps more than ten years ago, in 2011. He started with PocketBraille, VisualBraille, and VO Starter, which was the first VoiceOver training app for iOS. He has also worked on apps for Blind Bargains, the American Council of the Blind, and the NFB Newsline Mobile app.

In addition to programming, Michael has worked closely with individuals who are blind or visually impaired as a technology instructor with various agencies in Texas. Michael is passionate about new technologies, and believes that everyone should have equal access to information.

Want to get tips, tricks, and news from WayAround delivered directly to your inbox? Subscribe today to get the latest! We will never spam you, and you can unsubscribe at any time.